[This is a guest post by Akiyoshi Suzuki (Nagasaki University), with a summary of his Hestia@Birmingham presentation on the subject: ‘A Good Map is Worth a Thousand Words: 3-D Topographic Narrative of Haruki Murakami’]

The mapping of novels has been popular in Japan, either for simply providing a guide to fans wishing to follow the footsteps of the characters or else for bringing to the surface the unconscious, the blind spots or else the novel’s biopolitics. For readers of Murakami’s fiction, however, mapping is uncertain; the characters’ trails are strange and mysterious. And a constant refrain is heard, as when Naoko in Norwegian Wood asks, “Where are we?”.

The power of the subterranean underlies Murakami’s spatial imaginary. In the subterranean, “a fictional race called Yamikuro [INKlings],” which control physical and mental violence on the ground, “have lived beneath us since time immemorial…. They have dug a vast underground network of tunnels beneath Tokyo, linking their ‘nests.’ Ordinary people, however, never even suspect their presence” (Murakami, Underground, p. 208: see Figure 1). Juxtaposing a map of Japan of “time immemorial” with a present-day map allows us to see that Murakami’s novels sit uneasily on archaeological sites (tombs, cemeteries, etc.)—the present is literally built on top of the past.

Figure 1: Visualizing Murakami’s Dance Dance Dance, showing the ‘ground’ view on the left and the ‘subterranean world’ on the right.

Murakami’s characters walk along capes—contact points between the living and the dead. They walk the same routes, each time with the memory of someone who has disappeared 0r died. Naoko walks with her dead boyfriend, Kizuki, in her memory (see Figure 2). Truly, the “Yamikuro”—an anagram of “I mark you”—control her. Naoko, who lives on the border between the worlds above and below ground, ends up committing suicide, finally dragged into the other world. Spirits of places seem to possess Murakami’s living. 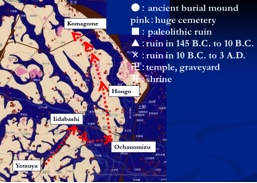 Figure 2: the world under the ground where Naoko walks in Norwegian Wood

Additionally, many of Murakami’s sites and structures are located in areas associated historically in Japan with violence and death. The map of Hard-boiled Wonderland (see Figure 3) depicts a world similar to that of the Edo castle, the mainstay of old Japan, surrounded by cemeteries and memorials to Emperor Meiji, who drove the Westernization and militarization of Japan. At the centre of the map is a clock tower, the location not only of Edo castle but also the house where Murakami lived. The map reveals that that people above ground, including Murakami himself, live within the walls of history, whether consciously or unconsciously, no matter what terrible events unfolded in history. 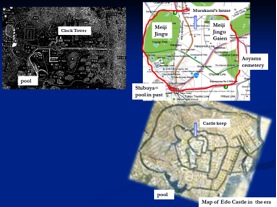 Ultimately Murakami’s protagonists try to live in the here and now, by feeling the wind, dancing, writing, and so on, by possessing memories and ties with others through memory, even if a memory is painful to them. Such a philosophy finds expression in the term Tsukuru Tazaki, which literally means “making a lot of capes”. In Murakami’s novels capes represent the border between the worlds above and below ground, between the present and the past. Both can be linked together through memory, which can connect people with each other. Hence, “making a lot of capes” means constructing a network of people, both on the surface of the earth and underground, through memory. Noteworthy is that the names of characters are also the names of various colors, such as White, Yellow, Red, Black, and so on. All the people in this world should connect with each other through memory even if a memory is painful, and go forward step by step. Mapping Murakami’s fiction shows us such a philosophy and simultaneously tells a story.